Every now and then the world is a surprising place. I had been looking for an old chess friend from my high school days!  Robert Pruitt was a brilliant mathematical mind and a tough chess player.  He came close to being the Alabama State Chess Champion one year tying for 2nd place.   It had been 40 years since I had the chance to speak with my old friend and our #1 board player whom I played behind as #2 board.

But, this morning around 8:30 am I got the surprise of a life-time.  You see, I had just found, what I hoped was Robert’s number calling it leaving a message and a clue.  At the end of the message I said “If this is my old friend Robert then P-Q4 (aka d4).  I had just sat down at my computer in my home office when the phone range.

The voice said “This is Robert Pruitt is this Nate“.  I was stunned, saying “Is this my old buddy Robert Pruitt from our days at Sidney Lanier HS.  Robert my old chess buddy!”  He responded “Yes, Nate its me“.   Then we started on a near 3 hour reminiscence.   It was so good to hear from him.  About 10 years ago I had contacted the Alabama Chess Federation looking for Robert, but he had gone “dark” as it were, retiring if you will, from active chess to take care of family!  They had not heard from him in some time.   Frankly, I feared that my old friend had passed and we would never again get the chance to play another game of chess together.  But, now I am hopeful to make a trip back to Alabama to play my old friend!

Below is a page from our HS Yearbook as Seniors.  We grew-up during the era of Bobby Fischer.  We remembered his greatness and how everyone of us were enamored with his mystique as a player.  Fischer in his later life had serious character flaws.   But, had other interventions taken place earlier in is life his legacy would not be viewed in such disarray as some have now portrayed him.  But, this is what it is!   Fischer, despite his character flaws, will be, from a pure chess perspective, one of the game’s greatest players of all time! 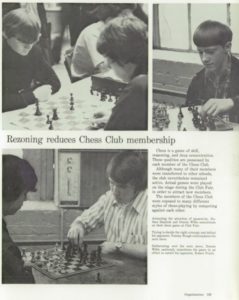 I am so glad Robert answered my phone call this morning!  After 10 years of trying to figure out what had become of him I was over joyed to know he was living a quiet life and was still in Alabama.  He still follows chess online and we spoke briefly about the current World Champion Magnus Carlson, especially his Blitz game strength.

In any event, we have started two games that we will play by email.  After about our 1st ten moves in each game I’ll post the positions here so people can follow the games.

In closing, I want to leave you as the reader with one final thought!

I was near exit 154 on Interstate 64, I think, going east the other day on my way to Richmond for a meeting when I discovered I needed gas.  I carry a magnetic sign on my truck about Playing ACES CHESS.  The lady, cashier (whose name I unfortunately did not get), inside noticing my door sign asked me if I played chess.  I told her I did and was helping to bring the game to K-12 students in our area.  She said that her father had taught her how to play and she loved playing him.  I could see the joy in her face as she spoke of her father and what playing chess with him meant to her and how much she was missing those days.

The memories I have and the ones I am building now through chess mean more than I can share.  I hope every parent, grandparent, community leader, business person, educator and so many others will work to increase the scope of K-12 chess for the K-12 community across not only Virginia but the entire USA.  I still remember how humbled I was when Jennifer Yu’s parents allowed her to visit with some Girl Scouts here in Charlottesville, Virginia in 2015.   It was a pleasure to bring such a talent here to be an example to young girls of both academic and chess excellence.

I hope readers have enjoyed the joy I felt from my reconnecting with my old chess friend, Robert, and what playing chess, even casually, means to making friends that you will cherish for a lifetime!